Selling the laptop ban: An activity

Posted on September 9, 2017 by nonmajorsbiology

In my last blog post, I reported introducing a new no-laptop policy in my nonmajors biology class. We just finished week 3, and things are going well — there has been no pushback, and I really enjoy looking out at a sea of faces instead of the lids of their laptop computers. 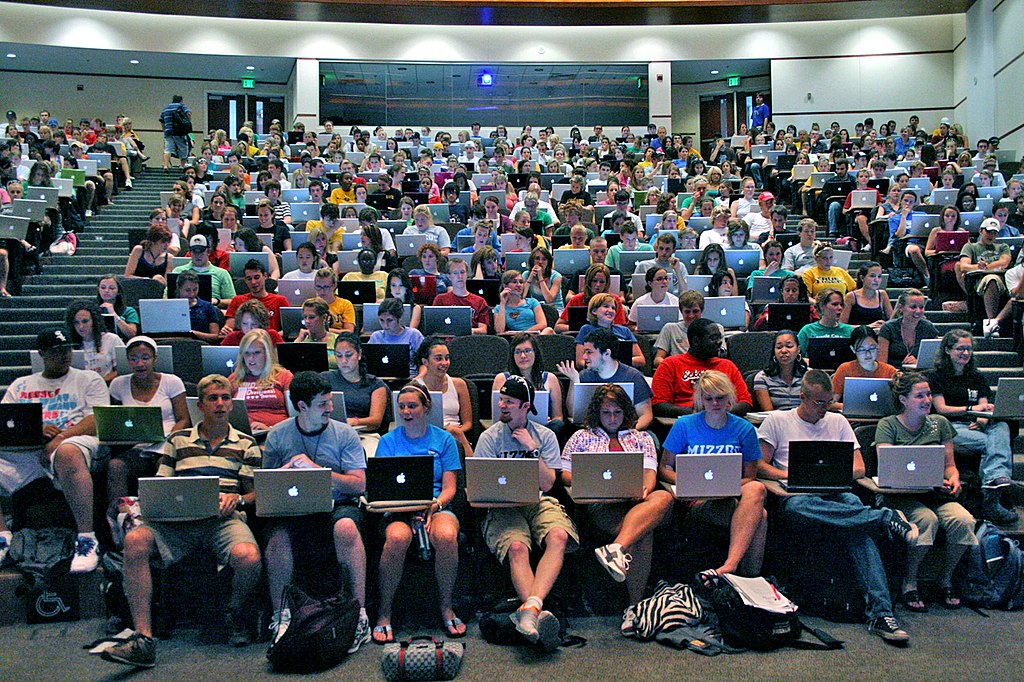 One of the studies that influenced my to-ban-or-not-to-ban deliberations over the summer was a study describing three experiments by Mueller and Oppenheimer. In a previous blog post, I went over the study in some detail; I’ll pull out a quote here from that post:

In the first experiment, students watched TED talks and took notes either longhand or on laptops that were disconnected from the Internet. Half an hour later, the students answered factual recall and conceptual application questions about the talks. Although the two groups did not differ on the factual recall questions, students who took longhand notes did better on the conceptual application questions. The researchers also found that students who used laptops wrote more words than those who took longhand notes, and that the laptop users had much more “verbatim overlap” with the lecture content. What the authors called “mindless transcription” predicted lower performance on the post-lecture questions.

To help my students understand why I adopted this policy, I used my “process of science” class during week 1 to explore this first experiment. After introducing the elements of an experiment, I distributed the abstract for the Mueller and Oppenheimer article:

Taking notes on laptops rather than in longhand is increasingly common. Many researchers have suggested that laptop note taking is less effective than longhand note taking for learning. Prior studies have primarily focused on students’ capacity for multitasking and distraction when using laptops. The present research suggests that even when laptops are used solely to take notes, they may still be impairing learning because their use results in shallower processing. In three studies, we found that students who took notes on laptops performed worse on conceptual questions than students who took notes longhand. We show that whereas taking more notes can be beneficial, laptop note takers’ tendency to transcribe lectures verbatim rather than processing information and reframing it in their own words is detrimental to learning.

I asked the students to work in groups to write a testable hypothesis in IF … AND [test] … THEN [prediction] format, using information from the abstract. This turned out to be a challenge; about half of the groups resisted proposing an “IF” explanation. That is, I was hoping for something like this: “IF taking notes on a laptop promotes shallower processing, …” A typical response, however, was “IF taking notes longhand rather than with a laptop is better, …”

After some discussion, however, we settled on a suitable hypothesis. I then gave them 10 minutes to propose an experimental design to test the hypothesis, including independent variable, dependent variable(s), and standardized variables. This went more quickly than expected, and when they shared their designs it was clear that most groups did not find it difficult.

Next, I revealed the design of the first experiment in the Mueller and Oppenheimer study. In a nutshell, 67 students watched a TED talk and were told to take notes either with a laptop or with pen and paper. Afterwards, all subjects did 30 minutes of memory tasks unrelated to the TED talk. Everyone then took a test containing factual and conceptual questions about the TED talk.  Using this information, I asked each group to draw a graph of the predicted results on the board. Most groups had no difficulty deciding on a bar graph or determining which variable should go on which axis. Interestingly, however, only one or two groups differentiated between the two dependent variables (performance on factual questions and performance on conceptual questions); most just used “test score” on the Y axis.

I then showed figure 1 from the paper, so students could compare their graphs to the corresponding graph from the actual study. Students seemed pleased to see that their graph-drawing instincts were correct.

Well, we were about out of time! I briefly showed the remaining two figures in the paper, which support the last sentence of the abstract. Figure 2 shows that laptop users can take down significantly more words than longhand note-takers, and figure 3 shows that the notes of students using the laptop had significantly more verbatim overlap than did longhand notes. If I had more time, I would have had the groups draw their own conclusions from the two figures—instead, I just told them why the figures were important.

Overall, I liked this activity because it allowed students to think critically about how to design a good experiment about laptop use, predict results that would be convincing, and see the results from the primary source. Although I can’t be sure, this activity may have helped to prevent pushback from students since I showed them instead of just told them why I was enforcing the laptop ban—and hopefully they understand it is for their own good! Next semester, I hope to manage time better to allow for a wrap-up discussion about the study: What did they think? Is the study “perfect”? Is its argument convincing?

If you’re considering a ban of your own and would like the PowerPoint slides I developed, please leave a comment and I’ll send them your way in a jiffy.

24 Responses to Selling the laptop ban: An activity