Posted on December 14, 2013 by nonmajorsbiology

In last week’s post I described the final pop quiz I give to my nonmajors biology class. To recap, the quiz asks three questions:

I have categorized the responses to question #2 by unit and summarized them as a pie chart: 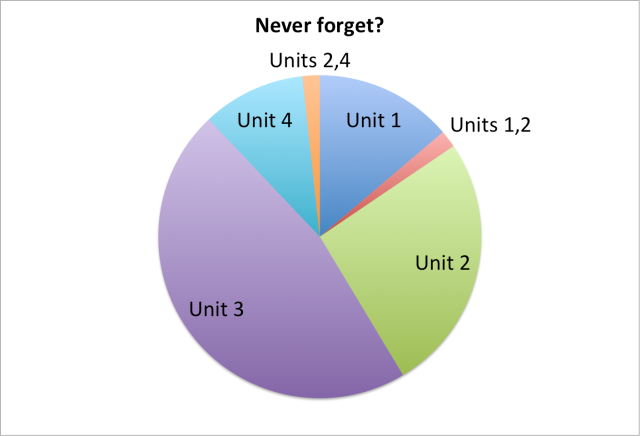 Unit 3 was the runaway winner in this category. Within that group, many students replied that learning about evolution was unforgettable; one said she was glad to “finally know the truth” about the evidence for evolution. The connection between natural selection and reproductive success, plus homologous and vestigial structures, seemed to open a lot of eyes. Another large group replied “Animal diversity.” While this may seem surprising, I credit it to our wildly popular animal diversity lab, in which guest speakers bring live animals for students to see and touch. This semester’s lab featured everything from giant emperor scorpions to a lemur and an owl, so it’s no wonder that a lot of students consider it unforgettable.

Unit 2 got the second biggest chunk of replies. Not surprisingly, most of these students thought they wouldn’t forget what they had learned about cancer, viruses, and genetics/inheritance, all topics that relate in obvious ways to human health and people’s personal lives.

Unit 1 came in third, but I want to give it special mention because three students cited the condom lab; two of these students specifically said they had never touched a condom before. I guess I thought condoms were such a common part of the culture that I never expected to contribute to my class’s education in quite that way! Other unit 1 answers were scattered among organic chemistry, the cell membrane, and (my favorite) why certain artificial fats and sweeteners aren’t digestible.

Although unit 4 topics were among the top responses for the “most important” category, this unit came in last for question 2. The responses were essentially the same though: These students will not forget all the ways that human activities cause environmental problems.

As was the case for question 1, there were a few responses that were hard to characterize. One student simply said, “Random fun facts,” and another said “Lectures.” Another mentioned something I once said in passing about how quarterbacks that stand up at the line of scrimmage to receive signals from the sidelines remind me of sentry meerkats on their hind legs. The one I like best, though, said, “I’m not that bad at biology!” One of my goals as a teacher is to help students learn that they’re capable of more than they think, so I love seeing answers like that.

Overall, the most memorable topics for students correlate with what I hope are the major takeaways from the course (evolution being at the top of that list). It is good to see that it’s possible to translate my own priorities into a strong impression on students. However, some topics that I care a lot about — like environmental issues — didn’t show up as often as I might like. I keep thinking I should spend more time on those topics, but the semester is just too short! Still, I can put more thought into how to make some of the more “forgettable” topics more relevant to my students.