Posted on April 1, 2013 by nonmajorsbiology

One of the hardest parts about teaching evolution is helping students get over their misconceptions about how natural selection works. In a search for “natural selection” on YouTube, I discovered something striking: there are no 1- or 2-minute videos on the topic! Most seem to be somewhere between 6 and 10 minutes, indicating that it takes time to explain this topic well. On the plus side, some of the longish videos are very good. In this post I’ll summarize one of them and describe how I might use it in my class next semester. 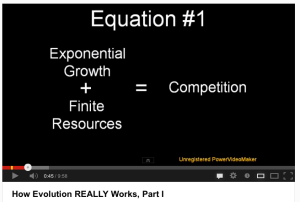 The first of a few simple equations from the video.

One of my favorite natural selection videos from YouTube is called How Evolution Really Works, Part I. During the first couple of minutes, the video lists several observations that make intuitive sense, such as that organisms reproduce and that Earth’s resources are finite, setting up an inevitable competition for resources. 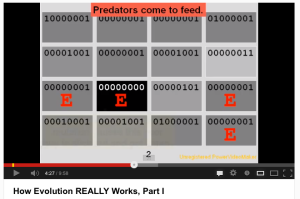 These simple 8-bit “organisms” make up a population.

The next part of the video uses a simple computer model to illustrate how evolution selects for predator avoidance. It doesn’t bother to make up weird cartoon animals or plants. Instead, it goes for simplicity. The organisms are 8-bit rectangles with “DNA” that encodes exactly one trait: the organism’s shade of grey. The organisms are set against a grey background. The only selective factor is that predators eat the 25% of the organisms that stand out most (the four marked “E” in the screenshot above). Another 25% die at random before reproducing, simply because they are unlucky. The surviving 50% mate at random (including random mutations) to produce the next generation. It doesn’t take very many generations to end up with a population in which most organisms blend in with the background. 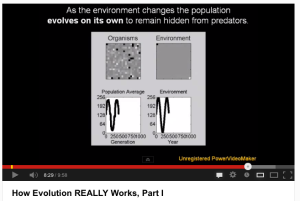 The “organisms” are the same, but the population is larger and the environment fluctuates.

The last part of the video adds to the complexity of the model by showing a population consisting of 400 organisms (upper left corner of screenshot at right). It also adds a continually shifting environment (the current color appears in the upper right corner of screenshot). The lower row has two graphs, one showing the average color of the population over time and the other showing the color of the environment over time.

I have been thinking about how to use this video in class. A 10-minute video is on the long side, but it’s such a good explanation of natural selection that it might be worth the time. I think I would plan to use the video like this:

Collecting the cards will lead to new insights into whether your students “get it” and what problems to address in a subsequent lesson. I anticipate that students should get a better grasp of the idea that evolution happens because of variation, competition, and unequal reproductive success, not because organisms “need to evolve in order to survive.”

Do you have a favorite evolution-themed video? If so, please post a link to it in a comment below. And if you have any tips for using these videos in class, please share them here.