What Is Life? An Active Learning Activity

Posted on January 7, 2013 by nonmajorsbiology

Is a rock alive? Courtesy of soil-net.com 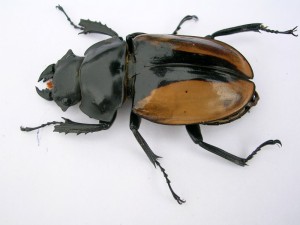 Is a stag beetle alive? How do we know? Photo by L. Shyamal

The American Biology Teacher recently posted an online “How to Do It” article entitled “What Is Life? An Activity to Convey the Complexities of This Simple Question,” by Annie Prud’homme Généreux. In this activity, each student receives a card depicting a living or nonliving object. Groups of six students describe what features their living objects have that the nonliving ones don’t have, leading to a whole-class discussion of the “What Is Life?” question.

How might you assess student learning after this activity? One possibility would be a clicker question such as this one (courtesy of Matt Taylor):

NASA defines life as anything that has metabolism, evolves, and reproduces. According to this definition, which of these would be considered alive?

I. An infertile animal such as a mule
II. A fire
III. A sequence of DNA
IV. Bacteria
V. A computer

If you prefer a more open-ended assessment tool, you might try a “Minute Paper” asking students to describe various points along the life-nonlife continuum.

This activity might be useful early in the semester for the lecture or laboratory portion of an introductory biology course. It should engage students more than a lecture describing the characteristics of life, and it should lead to a more nuanced understanding that defining life is more difficult than students might expect.

3 Responses to What Is Life? An Active Learning Activity